Apple’s encryption has been at the center of a heated debate over privacy and security these past weeks. A federal judge ordered the company to unlock the iPhone used by one of the San Bernardino shooters last December to aid the FBI’s investigation, but they have not complied: Apple maintains that such decryption would compromise the data of millions of its users. As the fight continues, we’ll see whether Apple will crack – or keep its code. In the meantime, let’s crack the etymological of code of the word at the center of this debate: crypt. 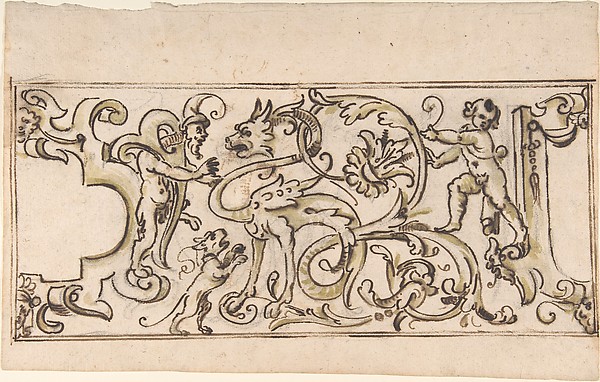 A 17th-century Italian grotesque ornament drawing. Image from the Metropolitan Museum of Art from the Harris Brisbane Dick Fund, 1934.

Telecommunications has been using encrypt since the 1950s, with encryption appearing shortly thereafter. Decrypt has been in use earlier, however; the Oxford English Dictionary (OED) cites it in the 1930s to refer more generally to the solution of a cryptogram, “something written in code.” Decrypt’s specifically technological sense followed encrypt.

The OED indicates encrypt and decrypt – these verbs for the conversion of data in and out of codes – were formed after cryptogram, which is dated to the early 1800s. Cryptogram is itself formed after cryptography, a word evidenced all the way back in the 1640s in a reference to Cryptomenytices et Cryptographiae Libri IX. This 1624 text on the art of ciphers (steganography) was written by Gustavus Selenus, a pseudonym, appropriately enough, for Duke August II of Brunswick. Shakespeare’s First Folio was published a year before and, as some will have it, “truthers” claim Selenus’ work reveals Francis Bacon as the true author of the plays.

As we see in cryptogram and cryptography, crypto- has been a not-so-secret word-forming prefix in the English language. The earliest record of the prefix comes in the late 16th century form of cryptoporticus, a reference to the Latin architectural term for a covered, semi-subterranean passageway, usually with windows looking up aboveground.

Nineteenth-century scientists were fond of it: they coined the likes of cryptocephalous and cryptozygous. Cryptozoology joins the “secret” club in the 1960s, though.

Nineteenth-century political and religious leaders liked crypto-, too. We see crypto-Catholic (a secret Catholic) and a whole host of similar conspiratorial coinages: crypto-Christian, crypto-Jesuit, crypto-Jew, crypto-deist, crypto-heretic, even crypto-Fenian, among others. From what I can tell, these formations are indebted to crypto-Calvinism, a 16th German concern about Calvinists acting as Lutherans, the OED tells me. These formations also anticipate the crypto-fascist and crypto-communist (later, just crypto) of the 1920s and 1930s.

Today, I imagine closet has largely outed crypto- in its “secret” appellations, but I could see some currency for crypto-liberal, crypto-conservative, or even crypto-establishment in today’s political climate.

For the first prefix, krypto–, the OED mentions a one-off Greek κρύπτορχος (kryptorkhos), “with undescended testicles”; this –ορχος is related to orchid, the beautiful flowers whose roots suggested testicles to its namers.

Latin fashioned Greek’s kryptos into crypta, an “underground passage” or “covered galley,” possibly even a “vault” or “crypt” in the modern sense. English’s first crypt, which the OED dates at least to 1475, was a “cave” or “cavern,” its meaning of “underground burial place” coming a century or so after. Cryptic begins naming the mysterious in the late 1600s, the crossword puzzle in the late 1900s.

With Morris Travers, chemist William Ramsay fashioned the element krypton in 1898 after the Greek, apparently because this noble gas  was “hidden” in a liquid he was studying. A friend of Ramsay suggested the name Eosium, for the Greek for “dawn” due to the brilliant spectral lines the element emits. The radioactive kryptonite, mined from planet Krypton, may have been so inspired by the element name when it first threatened Superman in the 1940s.

There are yet other cognates of crypt I was very surprised to find hiding in the word: grotto, a “small, pleasant cave” or cave-like place, and undercroft, a “vaulted chamber,” usually under a church. Grotto, via Italian, and undercroft, via Germanic languages, both go back to the Latin crypta.

Grotto and undercroft still evoke for me special places in my Catholic school days. My grade school, St. Mary’s, housed a shrine to its patron saint in a cool, shady cove between school buildings we called the grotto. From what I gather, shrines to Mary were erected by worshippers in grotto-like places, especially along pilgrimage roots. Underneath the church was the undercroft. My school deemed this crypt-like place a great place to house the kindergarten classrooms. These words are charged with powerful memories, peculiar and distinct places they are, with peculiar and distinct names.

Grotto, as indicated, comes from the Italian grotta, which derives grottesca, a kind of “cave painting,” or pittura grottesca. Some speculate these were murals found on the walls in the chambers of Roman buildings, which became known as grotte during their excavation. Grottesca yielded the French crotesque and, ultimately, the English grotesque. At first, a grotesque was a sort of fantastical and pastoral painting of human-animal forms, whose fanciful distortions propelled to the word’s later evolution to “bizarre,” “absurd,” “disturbing” – a term, to bring it full circle, some may use to describe Apple’s refusal to decrypt, others the FBI’s insistence on a backdoor.

2 thoughts on “Tales from the “crypt””