Did you get any chocolate bunnies or eggs in your Easter basket—or just a bunch of black jellybeans as some sort of April Fools’ prank?

Well, I’ve got you covered with plenty of timely etymological goodies for this double holiday.

END_OF_DOCUMENT_TOKEN_TO_BE_REPLACED

Christianity, in many ways, originates with Easter: Jesus Christ’s resurrection from the dead is a cornerstone of the faith. The Easter Bunny, most maintain, originates in German folklore involving a rabbit that delivered colored eggs to good little girls and boys. And the holiday’s bunnies, chicks, and eggs, of course, have longed served as symbols of fertility, rebirth, and new life. But what about the word rabbit?

Down the rabbit hole

Some of my favorite etymologies concern those simple, everyday words whose origins we simply don’t know. Over at Oxford Dictionaries, I recently wrote about a number of them, including dog. Yes, dog; we just don’t know what, er, etymological tree it’s barking up. We can add to this list rabbit, another commonplace word for a commonplace animal whose origins are obscure.

Here’s the problem with rabbit: there is apparently no native Celtic or Germanic word for this animal, as the critter was not native to northern Europe. These early cultures had a word for hare, no doubt, but not the rabbit. Now, I can’t quite tell you the difference between the rabbit and the hare, but the lexicon of our Indo-European ancestors certainly registered them.

We have record of rabbit by the late 14th century. Origins have been proposed like, well, rabbits. But, in his excellent An Analytic Dictionary of English Etymology, professor and philologist Anatoly Liberman easily dispatches with many of the early ones, including: the Hebrew for “copulate,” the same Latin root that yields rabies, the Greek for “creeper,” and even the name Robert.

But the picture gets more complicated when we consider robett, the word for rabbit in Walloon, a Romance language spoken in parts of Belgium and France (and, for a time, in Wisconsin). This cognate, though now considered borrowed from Flemish, has led many etymologists to seek a Romance root for rabbit, including in the French râble (“back and loin of the rabbit”) and the Spanish rabo (“tail”). Liberman traps these hypotheses, as tempting as they may look.

Instead, Liberman looks to a structure used in Germanic animal names, including German’s Robbe (“seal”) and the Icelandic robbi (“sheep, ram”): r + vowel + b. He also roots robin, whose name has been of equally problematic origin, in this structure. Onto this base was added a French suffix along the lines of -et or –ot.

As Liberman nicely sums it up: “Rabbit is a Germanic noun with a French suffix.”

But what does r-b mean?  Speakers of ancient Germanic languages apparently – and arbitrarily – had  this sound complex available as vehicle for naming animals of all sizes and stripes. And the French -et  or -ot signifies diminutives. So, a rabbit, if Liberman is correct, is some sort of little animal-type thingy.

Liberman puts rabbit into the bigger picture for us: “Rabbits were well known in the British Isles by the year 1200, but the word rabbit surfaced two centuries later. Most likely, speakers of English coined many words for the new animal. They are all lost, while rabbit has survived. The sound complex r-b in the name of the rabbit has no parallels outside Germanic.”

In the rabbit warren

English does have other words in its leporine lexicon, though. Coney was an earlier name for “rabbit,” attested by the early 13th century though largely displaced by the 19th century; its historic pronunciation, rhyming with honey, yielded some coarse slang. Coney ultimately derives from the French conil, which, in turn, comes from the Latin cunīculus.

But, like English’s own rabbit, cunīculus was not a native term for the Romans. Historians, even ancient historians, note that Spaniards introduced rabbits to the Romans. In Spanish, rabbit is conejo, though this develops from the Latin; etymologists suggest an ultimately Iberian origin for the word.

Some claim, though it’s disputed, the very name Spain means “land of rabbits,” from a Phoenician root for the “hyrax,” cognate, from what I gather, to Hebrew’s šāpān. The King James Bible uses coney, in fact, to translate the name for this creature that looks like a rodent but is not related. 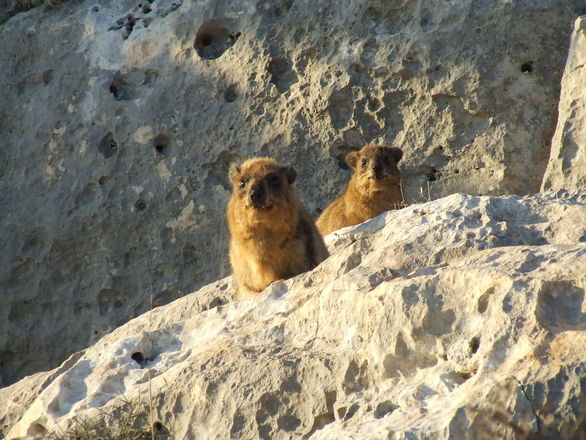 The rock hyrax, actually related to elephants, not rabbits. Image from http://www.freeimages.com/photographer/revi82-62142.

Bunny hops onto the scene last. The OED cites it as a “pet name for a rabbit” by 1606, from bun. Documented a few decades earlier, bun originally named a “squirrel” or a “rabbit,” leading some to a Scottish word referring to “tail.” But the ultimate origin is unknown – which, for an etymology nerd like me, is like candy in my Easter basket. Just no Peeps, please.