Etymologists are wary of March Madness.

No, it’s not the term bracketology, describing the art, science, and ritual of filling out one’s tournament bracket, which word induces many a cringe. (I, for one, find it to be a perfectly fine coinage.) It’s the inevitable utterance, “There goes my bracket,” issued in resignation when an upset fells one’s lovingly, inevitably wrought bracket.

See, we avert our eyes, for a bracket is, etymologically speaking, a “codpiece.”

Bracket (16th century) took the form bragget in Old English, referring to a “support in architecture” (Weekley). Skeat specifies it as a “corbel”–not the champagne (that’s with a k), nor Microsoft’s typeface, but one of these:

This bragget comes from the French braguette, meaning “codpiece” or “codpiece armor.” (How important you are, little r: Je voudrais un café et une braguette). As Skeat explains, bracket was “[s]o named from the resemblance to the front part of a pair of breeches, as formerly made.” In the 15th century, men wore separate hose, one for each leg, along with drawers. The crotch, though, needed a bit more protection and concealment. Enter the codpiece. Protection and concealment gave way to fashion statements, and the codpiece served to, emphasize, shall we say. Imagine, if you will, the above corbel in profile.

Forget Warren Buffet’s billion-dollar bracket contest.  Tied with its little bow, I think Henry VIII’s beats out anything even David Bowie could offer within this “winning bracket”:

The French braguette is a diminutive of brague (14th century), or “pants” or “breeches,” believed to be Gaulish in origin, perhaps in the form of *braca. Speaking of Gaulish, learn a little bit more about Gaulish and other Celtic languages on my latest guest post at Lexicolatry.

Even in the Romance languages, though, the codpiece was used as an architectural metaphor. Brague also referred to a “mortise.” And Spanish, for example, has bragueta, naming both “codpiece” and “bracket.”

Borrowing from the proposed Celtic origin, Latin has bracae for “pants” and Germanic forms (such as Old English’s brec, whence “breeches”) are traced back to a Proto-Germanic *brokiz, maybe from a Proto-Indo-European root for “break” (*bhreg-). Partridge attempts a Proto-Indo-European *brac-, “to encircle” or “gird on.” Perhaps there is an argument for this, given that early codpiece technology featured a kind of belt the wearer strapped on.

How about those typographical brackets: [ ], { }, ( ), and < >, among others? These are “from resemblance to some double supports in carpentry,” as Weekley tells us. The ODEE dates the usage back to the 18th century, noting that, in the 17th century, they were called braces. Believed to have influenced senses of bracket, brace we can trace back to the Latin brachhium, for “arm,” from Greek brakhion, for the same.

As for the origins of the kinds of tournament bracket we see in the NCAA, Slate magazine points us to an 1851 London Chess tournament. Below is a diagram of from the competition, as Howard Staunton provides in his 1873 account, The Chess Tournament. I think the image gives us an effective visual etymology, if you will: 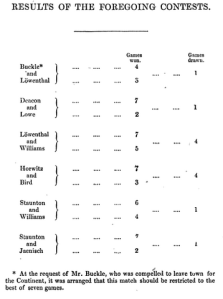 I suppose the real winner in all this is the human imagination–and its ability to add little spice or color to something as mundane into as, you know, that thing-y that holds up that bookshelf on your wall.

One thought on “bracket”